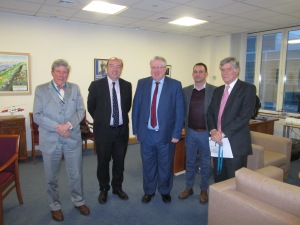 The £75m earmarked for the A27 between Lewes and Polegate is firmly committed to local road improvements and is not dependent on the outcome of the work of the Airports Commission into Gatwick Airport. That was the clear message yesterday from Transport Secretary Patrick McLoughlin.

The delegation took the opportunity to reaffirm the conclusions of the recent meeting of local parish councils chaired by Norman Baker, which unanimously supported a call for near-term measures to improve traffic flow, safety and access to the existing road, with particular focus on Wilmington crossroads, Selmeston and Firle.

The delegation heard from the Transport Secretary and the Highways Agency representatives that there was “a high degree of overlap” between what the local representatives were proposing and what they themselves had in mind.

Norman Baker says: “This was a good meeting, and useful to confirm that the £75m is there without any Gatwick strings. It was also good to hear that the Department for Transport is thinking along the same lines as those elected within my constituency, rather than the siren voices of those who live outside it and fail to understand the local issues.”

David Quysner, speaking on behalf of the parishes, adds: “It is really encouraging that we now have a commitment from Highways England to consult with local communities on the measures that need to be taken.”